Thanks to those of you who are following my Proekt 365 posts. Today’s post will come later, but I wanted to take a few moments to address one question I’ve received a few times now.

As an expat, my English is no longer strictly American. After living in Moscow, Russia, for eight years, a few Russian terms have become far more accessible at specific moments.

One of those words is проект, or ‘proekt’, the Russian term for ‘project’. For whatever reason, when I began thinking about doing this specific project, I kept hearing thinking about the project title in Russian: Проект 365 (‘Proekt trista scshest’decyat pyat’). Perhaps it was because I had chatted with my friend Gunilla about challenging one another to complete the project (she is a close friend from our days in Moscow). Who knows?  Regardless, in my attempt to claim ownership over this little project and make it more meaningful to me, #365grateful became ‘Proekt 365′. And, that it shall remain.

There are other Russian words and phrases which have crept into my everyday vocabulary and displaced the English terms. Beer is no longer beer, but пиво (‘pivo’). Sour cream is always сметана (‘smetana’). Да, ладно (‘Da, ladno’) is a catchphrase for ‘whatever’. Less translatable but a particular favourite is хитрый (‘khitri’), which roughly translates as ‘cunning’, but also carries a sense of twisted cleverness, and streak-of-evil cunning attached to its meaning.

Living with a Cuban has brought other phrases into every day use. My favourite and one which I use far, far too often ¡Oye! ¡Mira!‘, roughly translated to ‘Hey! Look!’ (my use is more akin to ‘shut up and listen’, but you get the idea).

Since Southern Finland is so English-friendly, there are few Finnish phrases which have entered our particular language. Perhaps that will change when / if we ever get a handle on what seems an incredibly difficult language.

It’s a great thing to be an expat and to have been afforded the opportunity to fully immerse into Russian life. Not only did I gain an understanding of a people who for so, so long occupied my consciousness as ‘the enemy’ having grown up during the Cold War, but it’s allowed me to luxuriate in the richness of Russian and my own native language (and recognise those same individuals as a people who are now very dear to me).

The words we choose carry such profound meaning because of how they are understood collectively but also because of the meaning we as individuals attach to them. So, choose them wisely. And, for kicks, add a few ‘foreign’ words into the mix. 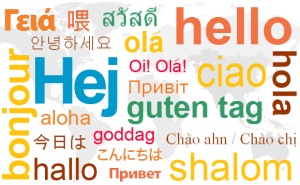