My introduction to Jenny Lawson began with Beyoncé, the Giant Metal Chicken. Need I say more?

I loved this book. And, I love The Bloggess for simply being her wonderfully wacky self. Several chapters in this particular book resonated with me quite deeply, largely because of her brutal honesty and clarity in writing about her own mental illness. Anyone who has struggled with that voice in their head will know how pernicious it can be. But, in her writing, she makes the reality of living with and dealing with those highs and lows a little more accessible for those who love someone battling the nonsense in their head. And, for that alone, I am grateful to her.

We’re all a little weird. We’re all incredibly quirky. And, we’re all equally wonderful in our uniqueness, whether we struggle with health issues or not. And, when we can, we should all be furiously happy.

And, we should plant giant metal chickens all over place, because why the hell not?! 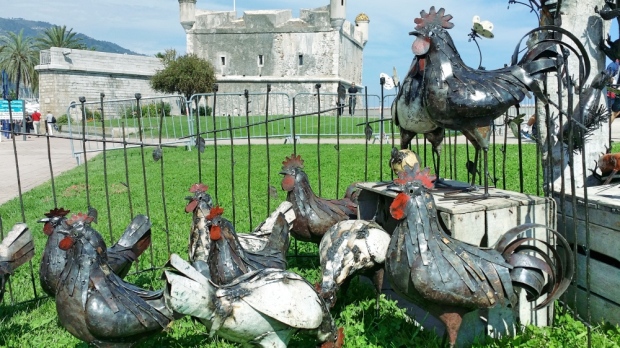 An army of metal chickens spotted in Menton, France, Spring 2014.

View all my reviews

Style guides of various sorts from my own library.

In my Academic Writing class, my students often ask what they can/should do to improve their writing aside from learning grammar and stylistic conventions in English. Aside from referring them to the various style guides around, my answer never waivers: ‘Read. Read as much as you can from writers who write well and writers you admire and enjoy.’ The clever sods typically follow-up my response with a question that inevitably stumps me: ‘Who should we read? What books do you recommend?’

So many amazing writers , both contemporary and historical, provide excellent examples of clear, clean and crisp writing it’s a challenge to come up with a list of any kind. Given that so many others have created their own lists of ‘must-reads’, it feels weird providing my own answer this question let alone that anyone is genuinely interested in my response. But, as their guide in all matters related to Academic Writing, I have thought about this quite a lot since returning to the classroom. At the very least, here’s hoping I’ve added to their holiday reading list and possibly provided them with a few gems previously unknown to them.

Given how often I get this question, I decided to put together a list (and link) that I can refer them to.

So, who should my students read?

Typically, when I’m asked I immediately respond with John Irving. To me, anything written by John Irving is a) brilliant; b) weird and slightly surreal; and, most importantly, c) exceptionally well-written. I tell my students to read anything he’s written (because I love him), although my favourites consist of The Cider House Rules and A Prayer for Owen Meany. I’ve lost count how many times I’ve read each of these books over the years. I love them each time. His characters are always tragically and bizarrely flawed. But, it’s the writing that astounds me anew every time. Mr Irving’s use of language and style combined keep me reading him, even when the stories fell well short of my hopes. In short, I love his writing—stories and characters aside.

In terms of other writers who provide excellent examples of style and language, here’s my full list (I supplement my own list with recommendations from friends gathered in Facebooklandiastan below). This inventory is in no particular order.

Now, the recommendations from others. Friends from all walks of life provided the following list. I’ve placed an * next to those I fully agree with and neglected to include in my list. If you have additional writers or titles that you think belong here, please share them!