Ask me what I’d rather give up—coffee or breathing—and I’d have to think about it. I suppose it’s a good thing that breathing occurs unconsciously because coffee is always on my mind.

This time of year, my coffee vehicle of choice becomes cold brew, that luscious, dark nectar that provides the quickest of caffeine jolts. With the long-awaited arrival of spring / summer in Helsinki, my precious elixir of life has been sitting and steeping for two days now, all ready to slowly filter (twice) and then sip and savour and enjoy. I’ve been waiting for this process for what seems like years.

Alas, something was slightly amiss when I opened the fridge this morning and reached for the pitcher of black loveliness.

My husband, The Joker.

He understands and accepts my love affair with coffee, just as much as he accepts my obsession with office supplies, books, yarn and Roger Federer. But, cold brew evidently is where he draws the line.

To Cubans, coffee is delivered in tiny little cups that resemble those itty bitty china tea sets for children’s make-believe tea parties. Those cups, which are so cute, simply don’t provide more than a sip or a gulp. In other words, it’s a coffee fairytale. The first time someone handed me a ‘cup’ of coffee in Cuba, I thought they were joking. ‘Where’s the rest of it?’, I asked The Cuban. He quickly explained that Cubans drink tiny cups throughout the day rather than opting for my giant bowl with a handle vessel. [NB: I now know to ask for a double every single time I ask for coffee in Cuba. It’s just easier and less disappointing that way.] Shortly thereafter, The Cuban developed the ‘Vanessa drinks coffee this way…’ explanation. I’m fairly certain our friends and family all think I’m certifiable or so wired that my heart will leap out of my chest at any moment. But, I will have my proper dosage of caffeine. 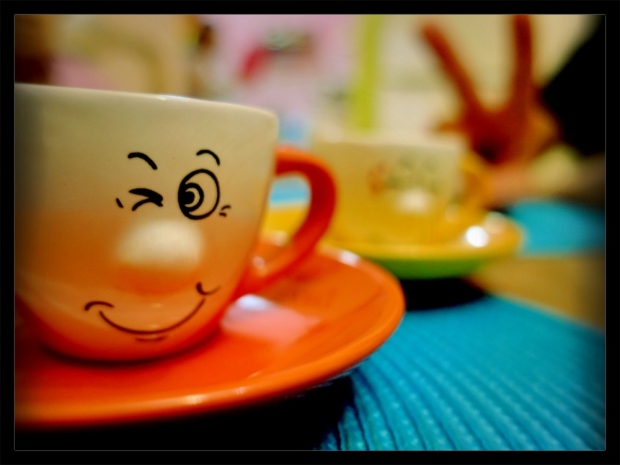 Two cups from a friend’s flat in Havana. Each cup featured a different face. As cute as they are, they’re fall too small for this girl’s coffee.

Despite the Cuban climate being insanely hot and humid especially when compared to Finland, cafe cubano is always served hot and just off the stove, typically with sugar. To my mind, cold brew is perfect for those sultry, sticky days and nights. I am so wrong, it would appear. My husband’s reaction upon introduction to cold brew went something like this:

‘Cold brew?! What is this evilness you are making? You’re ruining the coffee! Have I taught you nothing?!’… as if this girl ever needed lessons on making or drinking coffee.

So, this morning’s little message, one of a million tiny quickly scribbled notes scattered across our 12 years together, once again made me laugh silently and smile adoringly. To my darling husband, cold brew is indeed ‘The Devil’.

He may have embraced a more reasonable measuring cup by which to drink his own coffee. You know, a proper cup of coffee (still far too small for me, but progress is progress). And, I may have accepted the joke that is a Cuban thimble of coffee. But, just as I’ve had to draw the line at a respectable size for that all-important cup of coffee in the morning, The Cuban evidently drew his own line at cold brew.

Something tells me my summer caffeine jolt will now and forever be known as ‘The Devil’s Brew’.